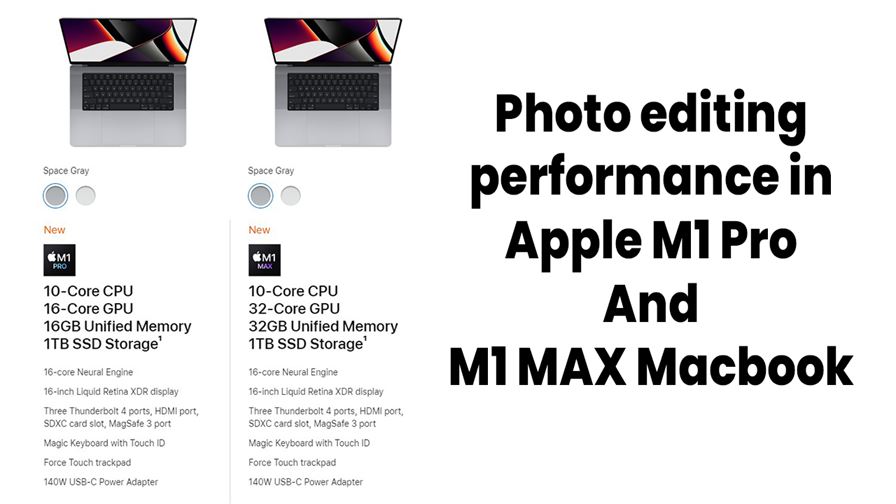 Photo editing performance highly depends on hardware and software in combination. Powering the all-new MacBook Pro, new chips feature up to a 10-core CPU, 32-core GPU, 64GB of unified memory, ProRes acceleration, and industry-leading power efficiency. And, that is where the photo editing services have reached another level of digital image manipulation.

Tasks like developing apps in Xcode are now faster than before thanks to the CPU in the M1 Pro and M1 Max, which delivers up to 70% faster CPU performance than the M1. M1 Pro’s GPU is up to 2x faster than M1’s, and M1 Max’s GPU is up to 4x quicker than M1, allowing corporate customers to speed through even the most intensive graphics workloads.

For the first time in professional systems, the M1 Pro and M1 Max have introduced “System On A Chip” (SoC) technology. Fast unified memory, industry-leading performance per watt, and remarkable power efficiency are in-build. Also, with enhanced memory bandwidth and capacity, which are all features of the processors you will have the best feeling in computer technology.

The M1 Pro supports up to 32GB of unified memory and has a memory bandwidth of up to 200GB/s. M1 Max has a bandwidth efficiency of up to 400GB/s, which is 2x those of the M1 Pro and roughly 6x that of M1, as well as scalability for up to 64GB of consolidated memory.

While the newest PC laptops have such a maximum graphics capability of 16GB, having quite so much memory provides for graphics-intensive activities that were previously inconceivable on a notebook. Due to the obvious M1 Pro and M1 Max’s robust process, they give the same standard of performance whether the MacBook Pro is connected in or running on battery power.

“M1 has transformed our most popular systems with incredible performance, custom technologies, and industry-leading power efficiency. No one has ever applied a system-on-a-chip design to a pro system until today with M1 Pro and M1 Max,” said Johny Srouji, Apple’s senior vice president of Hardware Technologies. “With massive gains in CPU and GPU performance, up to six times the memory bandwidth, a new media engine with ProRes accelerators, and other advanced technologies, M1 Pro and M1 Max take Apple silicon even further, and are unlike anything else in a pro notebook.”

M1 Pro has 33.7 billion transistors, well over twice or as much as M1, courtesy of the industry-leading 5-nanometer manufacturing techniques. A new 10-core CPU with eight high-performance cores and two high-efficiency cores exceeds the M1 by up to 70%, giving in incredible pro CPU performance. Especially compared to the newest 8-core PC laptop processor, the M1 Pro provides up to 1.7x greater CPU performance at the same power level and uses up to 70% less determination to accomplish the PC chip’s peak performance. 1 M1 Pro is capable of managing even the most difficult jobs, such as high-resolution photo retouching.

M1 Pro comprises a 16-core GPU, which really is up to 2x faster than M1 and up to 7x speedier than the integrated graphics on one of the most recent 8-core PC laptop processors. 1 When contrast to a strong discrete GPU for PC devices, the M1 Pro provides up to 70% higher performance while utilizing 70% lesser electricity. 2 M1 Pro could also be customized with up to 32GB of fast unified memory and up to 200GB/s of higher bandwidth, allowing 3D artists and game designers to accomplish so much on the road than it has ever been.

M1 Max: Notebook With The Most Powerful Chip In 2021

M1 Max seems to have the same strong 10-core CPU as M1 Pro, but it does have a large 32-core GPU that produces up to 4x faster graphics performance than M1. M1 Max is Apple’s biggest chip, featuring 57 billion transistors, 70 percent more than M1 Pro and 3.5 times more than M1. Additionally, the GPU provides performance in comparison to a high-end GPU in a small pro PC laptop during using up to 40% less power, along with performance equivalent to the highest-end GPU in the biggest PC laptops while ingesting up to 100 watts less power. As a result, the new MacBook Pro releases less heat, ventilation operates silently much less often, and the battery performance is exceptional. When compared with the previous 13-inch MacBook Pro, the M1 Max alters graphics-intensive processes, with up to 13x quicker dynamic timeline rendering in Final Cut Pro.

M1 Max too has a significantly greater on-chip network and double the memory interface over M1 Pro, providing for up to 400GB/s of memory bandwidth, or roughly 6x that of M1. As a consequence, the M1 Max may well be equipped with up to 64GB of swift unified memory. M1 Max is now the most powerful chip ever produced for a professional netbook, with unparalleled performance.

M1 Max goes even farther, with two ProRes accelerators and up to 2x speedier video processing than M1 Pro. Especially compared to the previous-generation 16-inch MacBook Pro, the new MacBook Pro with M1 Max can process ProRes video in Compressor up to 10x way faster.

M1 Pro and M1 Max are both equipped with all these powerful proprietary capabilities that help professionals take about there workflows towards the next level:

macOS Monterey is engineered to exploit the potential of the M1 Pro and M1 Max, offering outstanding performance, pro abilities, and power consumption. The Mac keeps coming up instantaneously from sleep, and the entire structure is speedy and very intuitive, for the Monterey’s design for Apple silicon.

Apps can understand and make use of all the new CPUs owing to developer tools like Metal, whereas Core ML optimizations were using the powerful Neural Engine to make machine learning techniques run even smoother.

Improved power distribution capabilities dynamically divide processes between the quality and performance cores both for the incredible pace and battery life, and pro app workload data is leveraged to aid improve how macOS assigns multi-threaded acts to CPU cores for top performance.

Existing Mac programs that have not been upgraded to Universal will run with Apple’s Rosetta 2 technology, and customers will be able to run iPhone and iPad apps directly upon this Mac, opening up entirely new potential possibilities.

If you are an Apple lover you must have one of the latest laptops we are about to compare. Well, we are not talking about the fruit here. It’s about the latest Macbooks that we are discussing here. Both the laptops are amazing with the latest features, hardware, and software.

Still, there should be some differences because the price difference is about $1200. Unfortunately, the scaling programs did not show much difference that may be worth that much price difference but still, the higher performance is always a better choice for use.

However, if you are considering gamings there will be a very slight difference. In the case of video rendering, both perform amazing only the M1 Max is faster. Well, obviously you are spending almost half of M1 Pro additionally to purchase M1 Max and the performance is logical.

But, the experts gave their review and confirmed that spending $1200 more is not really significant unless you need a really high-performance machine with 32 Core GPU and 64 GB of RAM and double memory bandwidth instead of 16 core GPU and 16 GB RAM.

I have collected all the data to compare the Macbooks from “Luke Miani” YouTube channel where he went so deep into each configuration from hardware to software and performance to evaluation. M1 vs M1 pro is also visible in his video but we are not bringing that in here. Let’s have the final result, shall we!!

Math For The Photo Editing Performance

According to this test report, you can spend 12 seconds by spending $1200 which means a hundred dollars can save one second.

Both of the machines are absolutely bunkers where you have a 30W CPU and 30/60W GPU. And, that is far better where you use hundreds of watts in desktops.

Shadow of the Tomb Raider FPS (The higher the better)

Extra Feature You Can Use For Photo Editing Performance

Shadow of the Tomb Raider FPS (The higher the better)

Well, both the MacBooks for photo editing performance are truly amazing, and there would be a slide difference between M1 Pro and M1 Max which would be highly difficult for anyone to sort. However, if you do video rendering in 4K 60 frames per second, you will find the difference depending on the video length. So, according to the professionals and apple M1 Pro and M1 Max benchmark scores, M1 Pro is sufficient if you do not think of ultra-high-performance gaming. Otherwise, spending an additional $1200 for M1 Max 16” is not worth it.

To conclude, M1 Pro and M1 Max both are the most advanced performance machines that no other is even close to that. By the way, you can have some more laptop evaluations of early 2021 from our blog, “Best Laptops For Photo Editing In 2021”. Let’s get back. You can do almost all kinds of heavy processing and graphic performance in this Macbook without being dependent on desktops. Also, the battery life for both the laptops is pretty amazing that is 20 hours at least. Also, the sleek metallic surface could be a smart appearance when you hold that in hand.

Why Macs are Perfect for editing with Photographers?

Ans: MacBooks are well-known for their picture editing prowess, with strong components that make image post-production a snap. Furthermore, MacBooks are often light and thin, making them an excellent choice for photographers who need to edit their photos on the road.