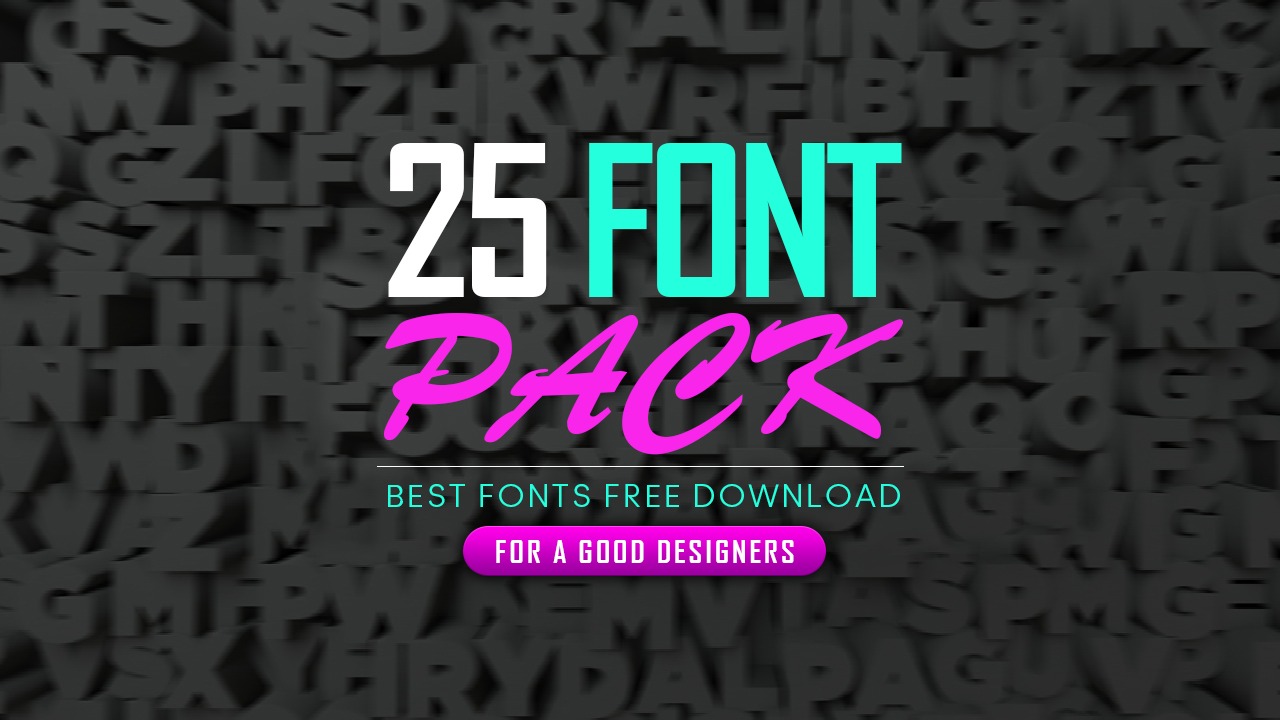 The best fonts are the ones you can use for the most effective content visualization. When it comes to branding, logotype fonts are of central value. Fonts are likely the most significant asset for a graphic designer. The decision of typeface can be the distinction between great or terrible design. You require something that looks simple by eyes, that can have a unique personality, and be groovy in different situations. While choosing a font, think about the customer’s personality, the uses of the logo will be utilized for, and the design’s timelessness.

There are a variety of bright and different options for the additional character sets. I have compiled 25 of the best free logo fonts currently available. These logos are being used by many graphic design companies and designers also. We, Clipping World also use some of them in our graphic design projects. Have a look, download the ones you love, and tell us if you’ve used them for your projects! While many typeface collections seen here can be used complementary, kindly ensure you review the terms associated with each one.

Clipping World always wants to spread creativity to others. Collecting these fonts and giving you the direct link is a part of that. We not only provide graphic design services but also do all sources of image manipulation services such as clipping paths with shadows, image masking, image restoration, Raster to vector, Background removing, and many more.

Alva is a very nice minimalist geometric font for posters and headlines, this font has two super cool styles that you can easily mix between uppercase and lowercase. Another great font was designed by Marcelo Reis Melo and it is exclusive for Free Goodies for Designers! Available in the formats OTF TTF and WEBFONT.

Bosk is a handcrafted brush text style by Boris Garic intended for everything vintage and grungy! The textual style accompanies more than 400 characters multilingual help incorporates Russian, Cyrillic, Central European, and Turkish, and so on.

You’ll perceive the awesome and energizing with this typeface, which is flawlessness in every hand brush. Presenting Brownhill Script Font! Brownhill was designed by Simon. Brownhill Script is written by hand text styles set. Extremely cool for logos, informal ID, manually written statements, item bundling, stock, social media & greeting cards. What’s more, simple to make design t-shirts and different items. It extremely spare time in making the design of a product. It contains a full arrangement of lower and capitalized letters, a huge scope of punctuation, numerals, and multilingual help.

License: Personal Use Only

BRUX is a great smart brush text style, this textual style is strong and full of life! Will give a great deal of identity to your manifestations. Incredible for Print and advanced projects! This text style has Swedish, German, and Spanish characters, and it’s accessible in the arrangements: OTF, TTF, and Webfont.

This asset is free for both personal and commercial usage.

Buffalo is a loopy and peculiar monoline content textual style from Hustle Supply Co. This premium free font is vintage-themed and ideal for marking and limited-time ventures! This text style is accessible free only from Pixel Surplus! It includes Latin extensions to support most European languages.

Casual Font designed by Gülşah Cansever. Casual is completely free, can be used commercially, you can use it in all your projects. Incredible for Print and advanced projects. Extremely cool for logos, informal ID, manually written statements, item bundling, stock, social media & greeting cards.

It is released in 2013, but its popularity and market value are so huge that after 5 years it still holds a strong position. The author of this font is Paulo R. it’s free for personal and commercial use. You can use it for Logos, T-shirts, banners, and wherever you want.

Dosis, an adjusted sans serif textual style, embodies a genuinely present-day and new feel with its prolonged letterforms and different weights. Its lighter weight is breezy and fun, while its bolder weight demonstrates greater identity. Compare this clean modern text style with a turbulent cloud foundation.

Fibre is a complimentary handwritten modern font. All the fundamental characters are different in the sense that none of them have the same sound. This vintage-style font’s metrics and kernings are developed to accommodate the most optimal reading experience an all-caps front can provide.

Coves is a free font featured by regular curves, ideal for titles and logo design. It includes two weights, light and bold. Designed and released by Jack Harvath. You can download the two font weights of this font including Coves Light and Coves Bold. Also, use for personal purposes.

Henrik is extremely versatile and excellent for achieving that vintage aesthetic with your designs. It features textured uppercase characters and select punctuation that will work great in branding, badges, labels, apparel, headlines, and much more!

Jura is a family of sans-serif fonts in the Eurostile vein. It was originally inspired by some work I was doing for the FreeFont project in designing a Kayah Li range for FreeMono. I wanted to create a Roman alphabet using the same kinds of strokes and curves as the Kayah Li glyphs, and thus Jura was born. It has been expanded to include glyphs for the Cyrillic and Greek alphabets as well.

The original Kayah Li glyphs have been included in this font. (Note that glyphs for writing mainstream Burmese are not and never have been a part of this font.)

Mindfully is a signature font from Sinikka Li that has been made to give your text a beautiful & calligraphic look. Each letter has been created with lots of thought and love. If you’re looking for an elegant yet cute typeface for projects such as logos, printed quotes, invitation cards, social media headers, product packaging, and posters, and more – this font is the perfect fit!

The font comes in TTF format (works with Mac & PC)

Free for personal & commercial use

Neuron Typeface is a contemporary take on the futuristic geometric sans serif style of space theme. The cold, geometrical shapes typical of those modernist typefaces have been made softer and more contemporary by visual corrections and slightly rounded corners, and a minimalistic design feel.

It comes in seven weights with matching italics and features an extended character set with open type support for small caps, ligatures, alternates, only Basic English letters, and numbers.

Nikoleta Typeface is a free font from Boris Garic. It was inspired by the tall nature of the Bebas Neue font. I wanted to make a font that can be used well on posters or headlines or for anything you need to catch people’s attention.

It is created by Wojciech Kalinowski. He was first created NovaCut for making inscriptions on stone. Initially, the font contained only capitals and digits and existed only on paper and stone inscriptions. In 2010 he decided to transfer this font to a computer and made the missing lowercase and some basic signs. It was initially named Gothica.

It is created by Dave Whitley. It is used for both personal and commercial. Dave designed it for a graphic designer. It is free for personal use, so you can use it for your project also. The download pack is included with the license key for personal use.

The pristine typeface is a fully developed script font built up of letters, numerals, and various glyphs. It is a handwriting style modern and an italic typographic project crafted and provided by G. Senzana.

Russo means Russian. It seems strange that in a font there is no snow, vodka, or bears. What I wanted to show is that Russian culture is quite varied and modern. In Russia, too, some people love good fonts and typography. Russo On is designed for headlines and logotypes. It is simple and original, stylish and casual.

Russo On is a Unicode typeface family that supports languages that use the Cyrillic, Baltic, Turkish, Central Europe, Latin script and its variants, and could be expanded to support other scripts.

Check out our latest relevant article:

This flowing script is perfect for creating wedding invitations, signatures, letterheads, logos, T-shirts, and everything in between.

Free for personal & commercial use

A simple, clean, and yet sophisticated typeface was designed by Adilson Gonzales. Skyer is the search for an audacious result. It’s the combination of several design references and at the same time, it’s clean and sophisticated. Skyer was born from the big cities, but it’s an attempt to seek space out of chaos. Feel free to download and use Skyer in your next projects.

Free just for personal use.

Summer Hearts is a hand-painted All-Caps brush typeface from Hustle Supply Co., designed to be used with script typefaces or as a standalone display typeface for Titling, Posters, Branding, Logo Design, Etc.

It is a handcrafted script font made for many different applications & styles to personalize your products. Tuesday night features extra-large capitals for a unique signature style that is perfect for wedding invitations, logos, apparel, decorative quotes, prints, scrapbooking, and much more!

Voltaire is a low-contrast condensed semi-geometric style sans-serif. Voltaire is highly readable and will work from medium text sizes all the way up to larger display settings. Voltaire was inspired by 20th-century Swedish posters whose letters have similar forms.

Wild Youth is another beautiful hand-drawn brush script font from Jeremy Vessey.  Wild Youth is a modern font with the distinct influence of adventure and the great outdoors.  Perfect for logos, quotes, stationery, apparel, and much more.

I have given all the direct download links for all 25 best fonts, so you guys don’t have to search for them or go to any website to download them.

Graphic designers are the key warrior of the innovative digital marketing process. You have to have vast knowledge about fonts and their uses if you want to create a unique design. Tell us some of the great fonts that you use in your graphic design. If you are planning to start a company contact us for any graphic design project.