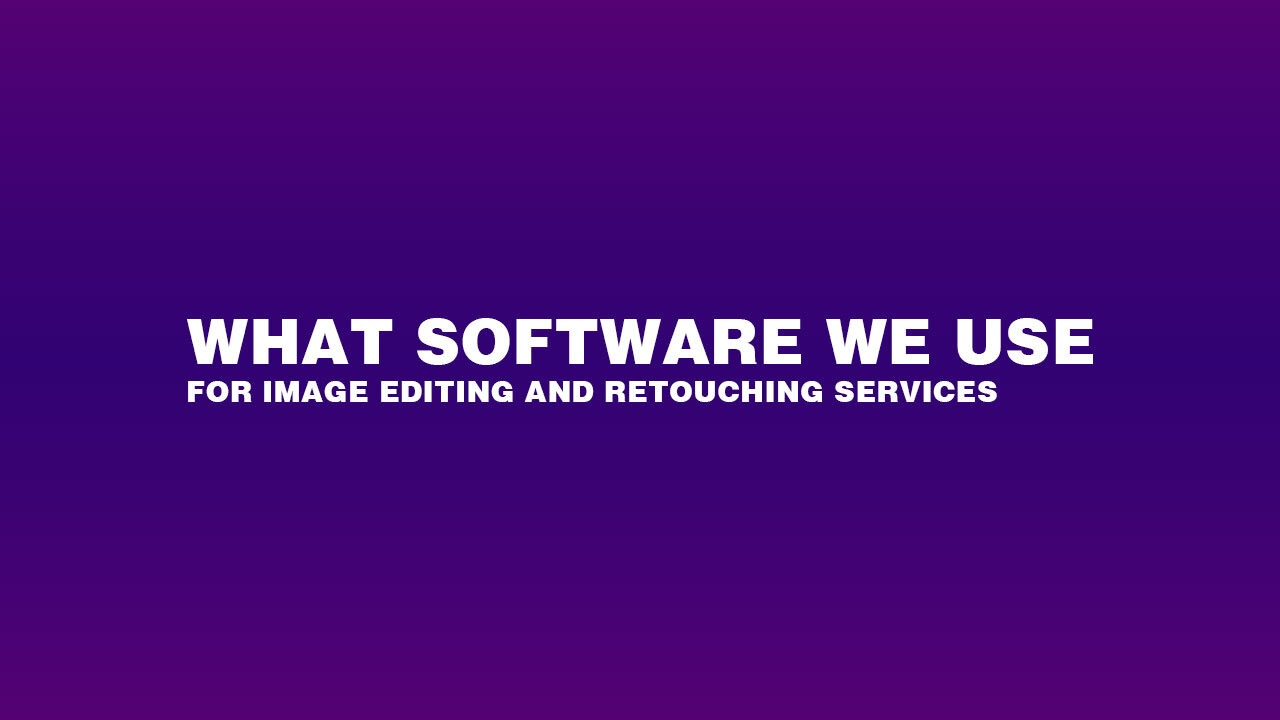 What software we use for professional works of image editing is no more a secret. Today we have all the opportunities to search and learn anything that exists. Things have become convenient for the advancement of information technology. Today image editing and retouching services have gone far enough to take a stable and demanding position. Look at the digital world today and compare it with the world twenty years back. You will see enough differences in technical and visual. Professional Image Editing Services’ software also grew at their full throttle. So, let’s learn about the software we use today for outstanding visual presentation

A number of image editing software you can see today. They are full of functions and tools. So, do they all have the same user-friendly platform for editing images? Unfortunately, no. Various programs contain various options for editing the image perfectly. The programs which are rich with tools and activities by the graphic designers, rule this division. Common editings we do are;

We will try to let you know some of the software with the amazing capabilities of editing. Stay with us and learn about them.

As you already know, the software should be convenient to do the editing job. With the proper hand of work, graphic designers give amazing masterpieces. In this short content, we will not be able to explain each software in details. But, we will give you a brief of the top five image editing and retouching software. The editing program is the platform only. Real creativity of inner can achieve perfection. We are about to discuss on;

Photoshop (What software we use)

The most renowned and used image editing software is Photoshop. Adobe corporation developed Photoshop in the year 1987. Two brothers named John and Thomas Knoll were the programmers of this amazing software. You can use this for any image from simple editing to advanced manipulation. And, you can have enough tools and options to have the freedom of editing. Even Though, the program has some rules to follow. You cannot just open the image in Photoshop and do anything like hand painting. Well, a device called Pen-Tablet (Wacom) has some features to use as a drawing board. You can use it for handwriting, painting, and some more things that you cannot do by mouse clicking.

The software is user-friendly if you learn it first. As it is rich with tools and features, you should use some time to know about them. If you have already used it, you should know the techniques you can use to save labor. However, some editings are quite complicated that requires hard work and accuracy. You should start with the tools to get the knowledge. Today, you can see thousands of tutorials on Photoshop through YouTube. But, I personally suggest you learn the basic steps from a professional graphic designer.

What Photoshop Can Do? (What software we use)

Photoshop is a heavily loaded image editing platform to do any kind of retouching. You can cut out the image subject, remove the background, show/hide areas as basic. Then, you can add multiple images, texts, shapes, etc. also, you can increase or decrease image size, transparency, and manipulation. And, there are a lot of things you can do with Photoshop that you need to try by yourself. You can also create animation with the images and do Vector designs.

Photoshop for PC and MAC

Photoshop is compatible with both Windows PC and MAC. You will find no difference with the tools or options for image editing for the same version. Only differences you may find with the menu tab and some names. As for the computer platform you use, there are some computer requirements you need to have to run Photoshop.

Photoshop Versions (What software we use)

Illustrator (What software we use)

Have you heard of the Master of Illustration? In the world of photo editing, Adobe Illustrator deserves the title. You can do artwork, drawings, and illustrations. Today all the creative designers in the world use Illustrator to create masterpieces. The journey began in the year 1987, at the same time as Photoshop. Adobe corporation created this program in collaboration with Photoshop and other editing programs they have. So, this program has the compatibility to use any edited image by Adobe programs.

The use of Adobe Illustrator is quite friendly to create arts. For the images of the digital and printed platform, the program is the master behind that. You can add image, logo, cartoon, objects, shapes, and anything that are relevant. And, you can use them by placing, resizing, decorating, positioning, and anything you need to do. Also, you can do some of the photo editings if you need to do it. You can choose the output image format with a large number of compatible extensions. The editing is actually and manipulation with the combination of multiple objects. So, you need to use your creative ideas to achieve the best results.

What Illustrator Can Do? (What software we use)

Illustrator has the ability to handle objects in many ways. So, it doesn’t matter which creative work you want to do with this. The question is, what else you want to do with Illustrator? Experts say, Illustrator is a program where you can have the freedom of choice. Almost every editing you can do with the program. The best part is, you can anything with it and change an object anytime you need it. Also, you can do Vector artworks and designs and they are free of transformation. How big or small you make the Vector file, the quality is always perfect.

Illustrator for PC and MAC

Adobe corporation released the Illustrator program for both PC and MAC. So, whatever OS platform you use, you do not need to change that. The minimum requirements for the program to install are nearly the same as Photoshop. The requirements are;

The creative design program Illustrator has a lot of file format support. The default file format is ‘AI’. You can save Illustrator work files in this format and can edit them later. Other formats that Adobe Illustrator supports are as below

Illustrator can save or export files

Illustrator can Open or Import files

Illustrator Versions (What software we use)

Lightroom (What software we use)

Adobe corporation created Lightroom to organize images and to do the manipulation. The system initiated for the MAC version but, today the program has the compatibility of most of the devices in the world. The best part is, the editing is non-destructive. You can edit the complete image later. Lightroom is not rich with a detailed editing method through pixels, but the combination in organizing is fascinating. In the beginning, the program was nothing but a product. Whereas, now it is a big family of Adobe with significant differences.

The use of Adobe Lightroom is pretty simple. Similar to Photoshop you can add/remove and organize images and create a collage. You can consider this as your personal library with information within. Moreover, the non-destructive editing method keeps the original details safe. You can add images in various file formats like TIFF, JPEG, PSD, etc., and more. The color mode support is both RBG and CMYK. Also, you can add and edit camera RAW images, no problem.

What Lightroom Can Do? (What software we use)

Lightroom is capable of doing most of the editing that Photoshop can. Well, not everything is the same. The purpose is a little different. Photoshop is mainly created to do detailed editing, whereas the lightroom is to create the presentation. However, the program is capable of adding color/exposure correction, white balance, red-eye correction, noise reduction, sharpening, cropping, straightening, etc., and more. But, the software cannot create drawings, symbols, diagrams, line arts, or maps. And, you cannot create 3D rendering or 3D objects at all.

Lightroom for PC and MAC

You can install and use Lightroom on your PC or MAC without any problem. The configuration for your computer should be similar to Photoshop or Illustrator. But, it is better to use a higher configuration because you have to do heavy works with it. We are mentioning the minimum configuration you can use for Lightroom.

Lightroom Versions (What software we use)

InDesign (What software we use)

Adobe corporation created a convenient software only for publishing purposes. You can create banners, magazines, newspapers, books, etc. easily. Designers related to this kind of activity, rely on InDesign. The program is available individually. So, you can have it without purchasing any other product of Adobe. Also, you can have it with Adobe Creative Cloud package. And, this was also included with the Adobe CS group. The latest version of InDesign is CC2020.

InDesign for PC and MAC

File Formats InDesign Can Save

Other File Formats InDesign can Export

InDesign Versions (What software we use)

GIMP (What software we use)

GIMP stands for GNIU Image Manipulation Program distributed worldwide for free. The operation is quite friendly and convenient to implement. Though, the software is not that rich with tools and techniques as Photoshop but good enough. If you are a creative designer and want to start your editing with free software, this one is good for you.

You can use the software the same as other image editing software you may have. The window is well-organized. You can find the tools easily at your fingertips. The editing method is also nearly similar to Photoshop. Well, you may not get it exactly the same but can handle it well. Obviously, this one is really helpful for everyone without any cost. One thing is mentionable, it is better to use GIMP for non-professional, personal works only. For professional purposes, you better choose Photoshop.

GIMP for PC or MAC

GIMP Versions (What software we use)

You may have various software for Photo Editing Services. The question is, do you want to pay or not? If you wish to do professional works, I suggest purchasing the Adobe software. You will have enough options to apply and modify both. Also, you can ask for online support if you face any difficulty. And, if you use the program for non-professional purposes, you can choose GIMP. The software has sufficient tools and options that you can use. No offense, free software is with some limitations you may face. However, you can do most of the editing you might need.